Week 6. The Saints traveled to St. Louis to face the Kurt Warner and his undefeated Rams. By game’s end, one of the most dramatic comebacks in New Orleans Saints history had taken place.
St. Louis came out blazing, scoring touchdowns on their first 2 possessions, and after 30 minutes of play, had a 24-6 lead. Then, inspired by an emotional, helmet-throwing Kyle Turley speech at half-time, it was the Saints turn to come out blazing.
Rookie Deuce McAllister opened the second half by taking the kick-off 46 yards. Two plays later, Brooks found Joe Horn who shook off two would-be tacklers and galloped off for a 46-yard strike. Afterward, during the Rams first possession of the second half, Sammy Knight picked off a Kurt Warner pass and returned it to the Rams 20. That turnover resulted in a 44-yard John Carney field goal. The Saints got the ball back yet again when a Dre Bly fumbled the kickoff and it was recovered by Fred McAfee on the Rams 18. Aaron Brooks turned that into a 6-yard TD strike to Joe Horn….. it was Joe’s second of the day. After a failed 2-point try, the Saints had pulled to within 2.
New Orleans took the lead with a 49-yard Brooks to Willie Jackson bomb and later would add 3 more later in the quarter after another John Carney field goal. That field goal was set up by a Darren Howard interception. The pick-off screen pass came just as the Rams looked like they were building up steam and driving for another score. Howard returned it 37 yards to the Rams 23. Carney’s field goal was the final scoring in a 3rd quarter that saw the Saints put up 25 unanswered points and 4 Ram turnovers. But the Rams weren’t about the quit. Putting a drive together, they tied everything up at 31 after a 6 yard Torry Holt touchdown catch. Then, with 7:02 left in the game, Aeneas Williams jarred the ball loose from Rickey Williams after a savage hit at the Saints 40. The Rams took over and drove to the Saints 23. On third down, Freddie Thomas then came up with a huge play, stripping the ball loose from Trung Candidate. Chris Oldham scooped up the fumble and returned it to the Rams 36 with 4:00 minutes left in regulation. John Carney then finished the last Saint drive with his 5th field goal of the day, a 27-yarder that left 1 second on the clock and gave New Orleans the 34-31 win. The defense came up with 8 turnovers, 4 of them interceptions. Aaron Brooks finished with 3 touchdowns.

With time winding down, John Carney puts it through to down the St. Louis Rams and finish one of the greatest Saint comebacks ever.

So riding high after the 18-point comeback, the Saints made ready for the New York Jets on the first ever Prime Time ESPN game in Saints History. But instead of the anticipated battle between two playoff caliber teams, yet another entry in the annuals of Saint’s lore would be written.

Losing 16-9, the most exciting moment of the game resulted in a total of 25 yards of penalties as the ever volatile Kyle Turley was flagged for a personal foul after ripping off Jet defender Damien Robinson’s helmet and hurling it downfield. Robinson had Aaron Brooks in a headlock that was twisting the QB’s head back so much Turley claimed he heard Brooks scream. In Turley’s defense, he felt like he was protecting his quarterback after seeing him “getting his head turned around like the Exorcist”. Turley drew an additional 10 yard penalty when he kicked the official’s flag. When comparisons were made between this incident and the personal foul call in the Giants game, Turley’s response claimed he didn’t see a pattern. “I don’t have an anger problem”. Damien Robinson was fined $20,000, Kyle Turley $25,000 and agreed to attend counseling. Brooks finished with a stagnant 32.4 QB rating completing only 12 of 28 passes for 164 yards. Both of his interceptions came in the Jet’s red zone. He was sacked 6 times and fumbled once. 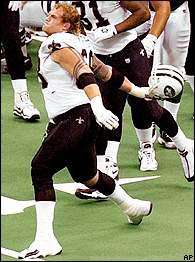 Against San Francisco, problems continued. Super-Brooks hit the field and threw for 347 yards and 2 TD’s while Ricky Williams added another 121 yards on the ground (his third 100+ yard game of the season). The offense finished with 488 yards. The only thing that was lacking was touchdowns. The Saints offense managed seven trips inside the 49er 32, but could produce only 2 touchdowns. John Carney’s four field goals weren’t enough. The usually stalwart defense couldn’t deliver. A total of 28 missed tackles were recorded. San Francisco was able to run out the clock after they got the ball back on their own 28 with 3:39 left to play. On that last game-ending drive, Garrison Hearst killed any hopes of New Orleans coming back with 58 yards rushing on just 4 carries. 3 of those runs resulted in 49er first downs. Jim Haslett claimed that he saw many positives in the game that encouraged him.
The Saints then got things going against Jim Mora and his Colts. After falling behind 14-0, Aaron Brooks rallied the team and played near-flawless finishing the game with a 144 passer rating (19 of 22, 249 yards, 2 TDS). Ricky Williams had his fourth 100 yard day with 120 yards and Joe Horn added another 148 on 8 catches. Boo Williams had 2 catches for scores….. one was set up by a 63-yard Deuce McAllister kickoff return. Tom Brady had 4 touchdowns as we fell to New England in game 10. Down 20-0 by half-time, we never recovered, losing by a total of 34-17.

The Panthers then visited the Dome as fans were treated to your typical Saints/Panthers slugfest with us on the positive side of a 27-23 contest. Brooks had an exceptional day hitting 26 of 40 passes for 330 yards and 3 touchdowns. It was his third 300+ yard game of the season and the fourth of his career. Ricky Williams enjoyed his fifth 100+ yard of the season with 102 yards and Joe Horn had one of his best games with 13 catches (1 shy of the team record held by Tony Galbreath) and 150 yards, 1 TD. The defense came on strong with 8 sacks and holding the Panthers to but 150 yards of total offense.

Playoff hopes were kept alive with a huge win over Atlanta the next week. Rookie Deuce McAllister scored his first NFL touchdown on a 54 yard blast and even threw a 12 yard touchdown to Willie Jackson. Joe Horn had another fine day with 138 yards on 7 catches including a 50-yard TD strike. The defense once again dominated tying a team record of 9 sacks and 2 turnovers.