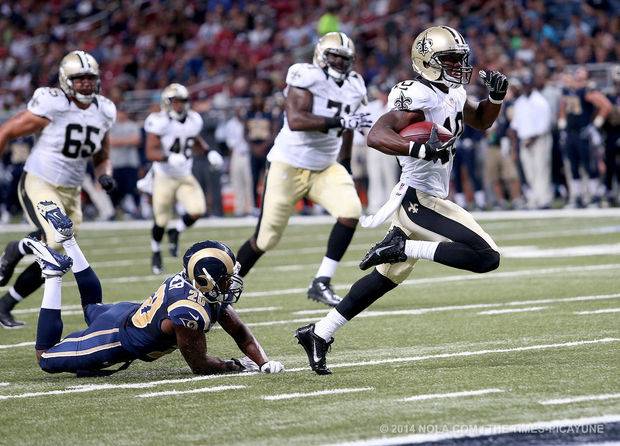 St. Louis — If the New Orleans Saints took much away from their first preseason game, it’s that they’re lucky they have several weeks to work out the kinks.

The Saints had 10 penalties, a missed PAT by Shayne Graham, and a slew of mistakes to be corrected during training camp in the 26-24 win vs. the St. Louis Rams at the Edward Jones Dome on Friday night. The Rams missed a 59-yard field-goal attempt as time expired.

The Saints looked like they were caught dozing during a few moments throughout the game. The Rams executed a 38-yard fake punt, picked off Luke McCown and Logan Kilgore and had an easy score in the first quarter when quarterback Shuan Hill found tight end Corey Harkey wide open on an apparent botched assignment.

However, key plays by running backs Mark Ingram and Khiry Robinson, in addition to a touchdown by rookie receiver Brandin Cooks, led the Saints.

The much-anticipated reunion of Saints coach Sean Payton and former defensive coordinator Gregg Williams was more of a snoozer than a firestorm. In front of a mostly empty crowd, neither the Saints nor the Rams displayed any of the flashy blitzes Williams put on display with New Orleans during a preseason game against the San Francisco 49ers in 2011.

Instead, it was a ho-hum affair by both teams, who had patchwork lineups out on the field. Drew Brees was out for the Saints, and the Rams sat quarterback Sam Bradford.

McCown started in Brees’ place, but the majority of the snaps went to Ryan Griffin, who played most of the first three quarters.

Griffin seemed to get more comfortable as the night went on, completing 16 of 23 passes for 179 yards and a touchdown. He found Cooks late in the third quarter for a 25-yard score in one of the flashiest plays of the night to put New Orleans up 26-17.

However, it was the running backs who shined the most.

With no Thomas, Ingram and Robinson combined for 106 yards and two touchdowns.

Robinson darted up the middle early in the second quarter for the team’s first touchdown and 10-7 lead, before emphatically spiking the ball to a few scattered boos around the dome. Not to be outdone, Ingram, who seemed to pick up where he left off last season, ran in for a 22-yard score later in the second quarter. The Saints trailed 17-16 at the half.

Stat of the day: Ingram averaged 10.4 yards per carry in the first half.

Play of the night: Make this the “would-be” play of the day. A short pass from Griffin to Josh Hill went 50 yards as Hill outran defenders down the field, stiff-armed at least two of them before being pushed out of bounds near the end zone. However, an illegal block in the back by Nick Toon pushed the end result back 10 yards.

Hill led the team with two receptions for 67 yards.

Not play of the night: The NFL is testing out new 33-yard PAT attempts in the preseason, along with extended uprights on the goal posts. That didn’t go so well for Shayne Graham.

Graham missed his first PAT attempt in the second quarter, as the ball went wide left and bounced off the upright. He made his second attempt.

Injuries: The Saints escaped relatively unscathed until the fourth quarter, when cornerback Brian Dixon was helped off the field by trainers.